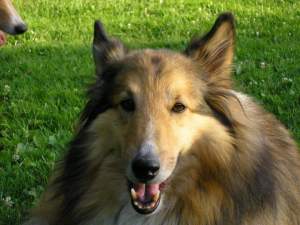 Duncan has been gone from me for two years today. It is the second anniversary of his passing. Not a day goes by that I don’t miss him. He was my reliable companion and I could take him anywhere.

This was not always the case. In his earlier years I used to refer to him as the sheltie from hell. But he grew into his epitaph-A Good Dog. As a young dog he never stopped. He was in constant motion. He wore me down to the point that by late evening I had to crate him or leash him to the coffee table leg so I knew where he was. Otherwise he was chewing, taking things or finding some other way to get into trouble. And he just wore me out by that time of day. I tried to put him in the attached garage for a short time so that I could get some things done in the house, thinking he could still run around and get some exercise. He got some exercise all right. By starting to chew through the dry wall to get in the house and be closer to me. This resulted in my leashing him to the coffee table. He was inside but I knew where he was. The coffee table still bares his teeth marks and has a couple of missing corners but otherwise it did survive his younger days. He and his cohort, Dakota, got into their share of mayhem too. Dakota is my brother’s dog but we all lived together for a few years. Duncan and Dakota were very nearly the same age. 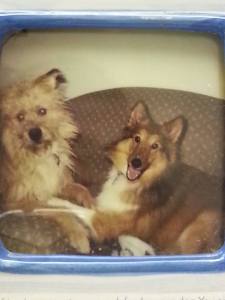 They had the best times roughhousing and playing together. Here they are about a year old and taking a pause from playing to look at me. They would play so hard and for so long that they would move the couch from near the center of the room to up against the wall. Duncan would also leave footprints on the wall at about my shoulder height from using it as a spring board as he leapt around the room. Although I didn’t think so at the time, now I look back and see those as good times. We are fortunate to still have Dakota in our lives. Every time I see Dakota, it’s like getting to spend a few minutes with a little piece of Duncan.

As Duncan matured, which did take several years, he became an exemplary dog. He participated in 4-H groups where I was an advisor and he learned to become obedient. He became more and more bonded to me and looked to me for direction and we became a team. Until one day when he was 7 years old, he became a certified therapy dog. We visited people and Duncan brought joy wherever he went. I could give him the “visit” command and point in the direction of someone and he would go socialize. Some people think that a good therapy dog is born and not made. While not every dog can be a therapy dog, I have found that you can make one. Duncan visited because it made me happy and his goal in this world was to make me happy.

Duncan and I were the ultimate team. We attended 4-H events, the County Fairs, parades, various residential facilities, and many, many public education events for Northeast Ohio Shetland Sheepdog Rescue. He attended all family and holiday events with us. (Although we did have to put the trash can on top of the refrigerator because he learned to work the spring loaded handle and could open it.) We could communicate our mutual affection by gazing into each other’s eyes. 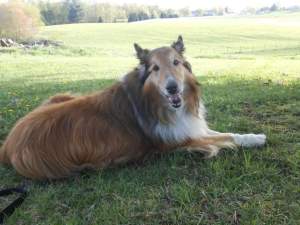 This dog went from being my greatest challenge to my greatest gift. I love him beyond life itself. Although I am happy, Duncan would certainly want me to be, there is a small part of my soul that is missing. It went with him because he became a part of me. His memory is with me as I go about my life. We walk a certain trail and I remember this is where Duncan and I last hiked together or spent our last evenings together. He is with me still. I wish for each of you, that you may one day experience such a special bond.