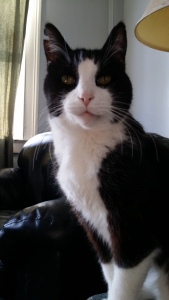 Harley was my idea of the perfect cat. He was a good mouser. He was regal and demanded respect yet he was also affectionate and loved his people. I had the pleasure of being Harley’s momma for 16 years. We lost him yesterday. He went in for a dental and did not survive.

It turned out that he suffered from a condition that I was not familiar with. Something called dental resorption. As near as I understand it, the tooth or teeth, begin to calcify at the root. This forms lesions and the calcification attachs the tooth to the jawbone so that it is hard to remove. There are more details and technicalities but I will spare you. In Harley’s case, the teeth were very hard to remove. In essence, by a few hours after the surgery, the amount of blood loss he suffered was too great and he succumbed. This was traumatic and unexpected for us because although Harley was old, he was in fairly good shape for his age. We picked him up from the vet’s and brought him home. He is now buried with our other furry family members that have gone before.

I first got Harley when I and a friend where hiking with our dogs on a path that ran beside my house. We made it about half a mile down the trail when a kitten of about 4 months came running up to me meowing. This was near farm land that was grown up and no longer used. I think someone dumped Harley there. He couldn’t have been born there, he was too friendly to be a feral kitten. He ran up to me even with our dogs and let me pick him up. My friend Becky said “you can’t leave him here”. And so I didn’t. He let me carry him all the way back home. He never struggled to get down. He soon became a part of our household.

I thought for a while on what his name should be, and finally came up with Harley. Now he is not named after the obvious Harley Davidson of motorcycle fame. His name was short for Harlequin because he was a black and white cat.

Harley made the move with us to our current house nearly 14 years ago.  It is an old farmhouse, built in 1830. Read as:  mice like it here! Harley was a supreme mouser. And catcher of moles, and chipmunks, and baby squirrels. Unfortunately for us, this was all in the house. We would not do well in this house without a cat. Harley taught his protege’, Morty to catch mice.

Once he had passed the torch, as it were, he gave up hunting. That was apparently something for the next generation.

In his retirement, Harley became ever more affectionate and communicative. Once we discovered that his teeth were bad, which is another story, he ate canned food. He would call to me first thing in the morning and again throughout the day whenever he wanted his canned cat food. I would put it in a crate for him (so the other cats and dogs wouldn’t take it) and in he would go. I would then close the door. Whenever he was done, he would call to me again so that I could let him out and put any remaining food away for next time. This usually made me smile because he communicated so well.

He also followed me around for affection. He would sit on the arm of the couch beside me and squint his eyes with happiness. He would rub on my hand and ask for ear rubs. And if I was busy doing something else, he would sit on the back of the couch directly behind my head, for maximum closeness while I read, or watched tv, or talked. He was my kitten always.

My world is an emptier place without a Harley Cat. But it is a better, richer place for having known him. 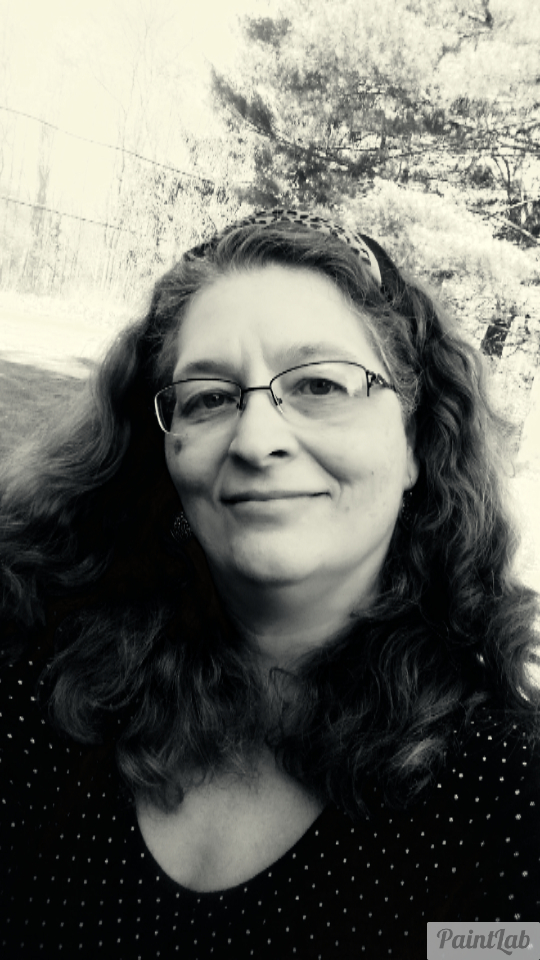 Spring rebirth and renewal is always appreciated here.  It takes place in the heart and soul as well as in the garden.  Let me take you on a tour. 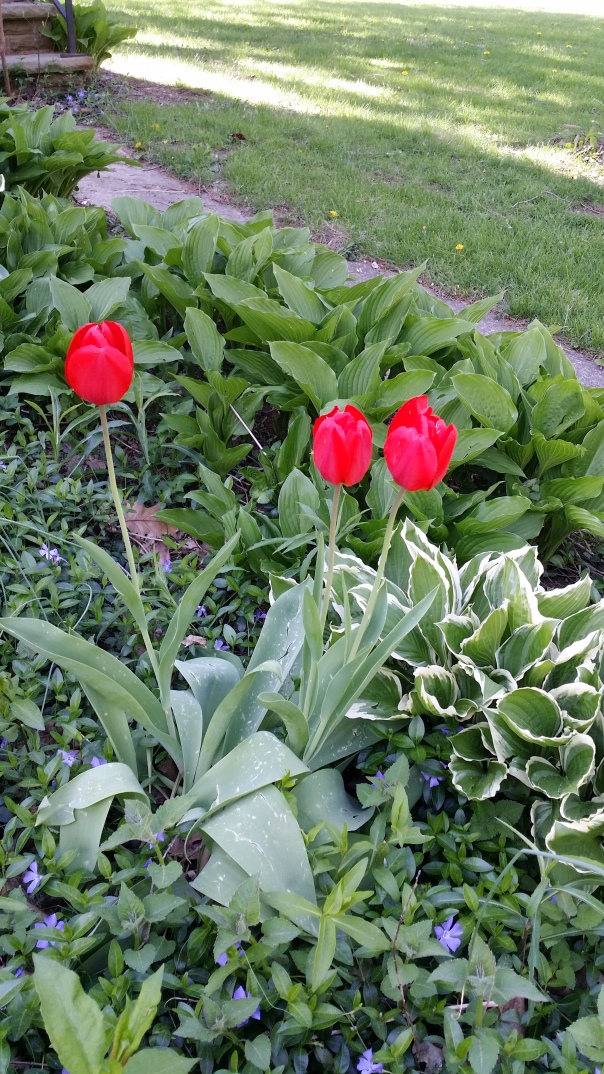 Tulips and hostas emerge from the bed beside the house. 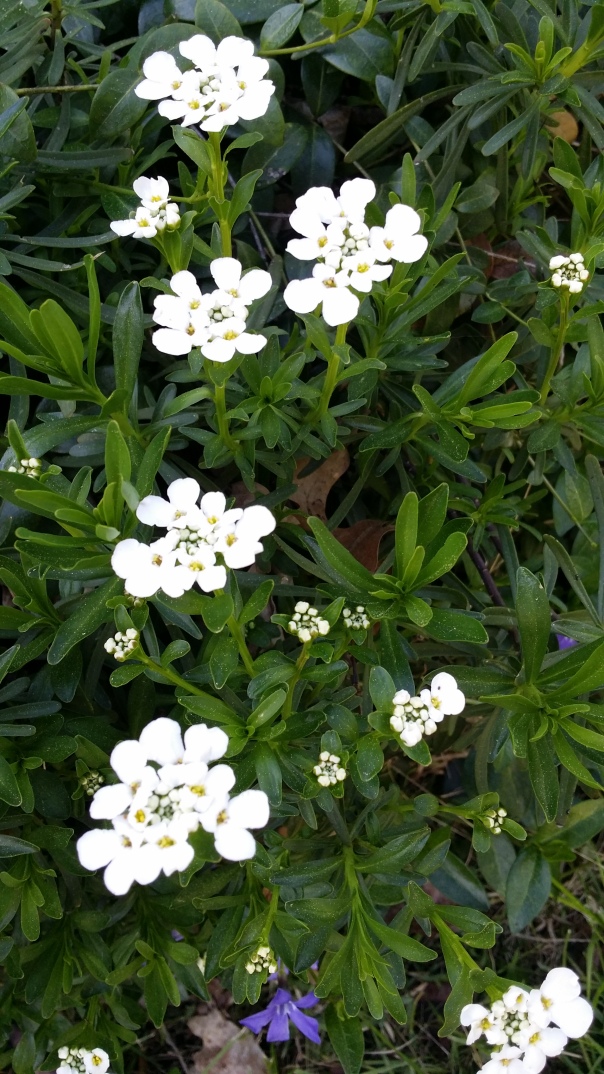 Candy tuft hangs over the side wall.

Bleeding hearts are just starting to come out.

The dogwoods are flaunting their finery. These are just a few of the sights that rejuvenate my soul. I hope that you are enjoying and communing with the blossoming of spring wherever you are.

Peace be with you. 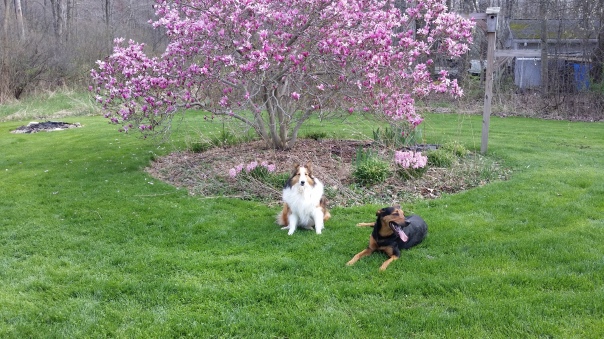 Spring has, at last, sprung here in Ohio. I finally have some pictures with flowers in them. And of course dogs. One of the benefits of teaching your dogs a few obedience commands is being able to pose them with things.

Dogs who know some commands get to share more of their lives with us. They are more pleasant to be around. And more trust worthy. And having a dog who listens helps keep them safe too. A few minutes every day makes a surprising difference.  Give it a try!

Sometimes I think our society is getting just a little too lax on what it considers to be acceptable, or mainstream, behavior.

I wanted to yell back to them, “Do you talk to your mother with that mouth? What if there are kids in these cars that can hear you?” In hind site, I probably should have, but you never know when that crazy person is the one next to you.

Someone I know was also out shopping last week and had two similar encounters in one day. He was joking with an employee and as he walked away, heard “f**king a**h*le. Later after making a purchase at another store, an assisting employee said “no f**k”.

Really people? Even on the job you think it’s ok to use this kind of language? Let me give you a hint. If you care to retain employment, there are few places that would find this language to be acceptable. Or even tolerated.

I also think/wonder some other things about foul language:

Ok, I am done with my rant. If you think language of this sort is ok, at least now you know why some others of us do not feel that way. My wish for you this evening is still, …Peace be with You.