Even though it is officially fall and only one more day until October, the garden is still putting on a grand performance.

The roses look better than they have all summer. Many of them are new this year so they may just be getting established. 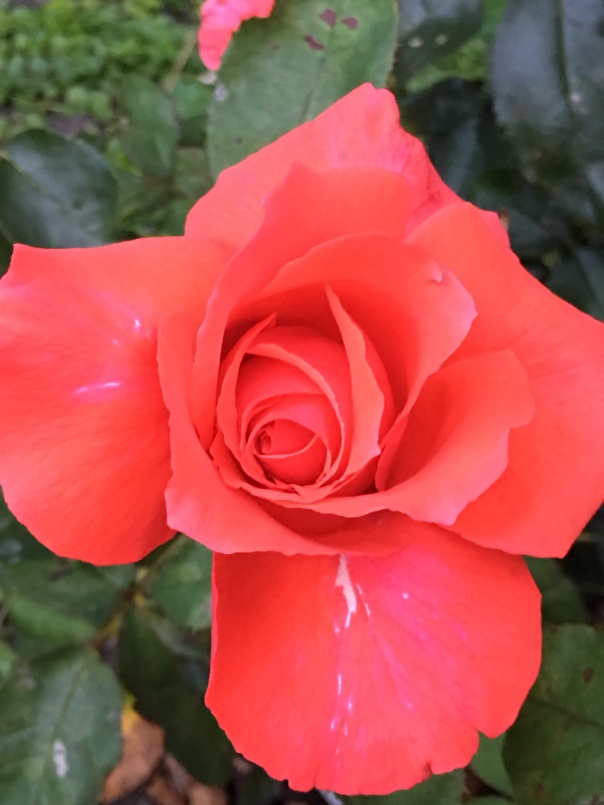 Even Zekie seems to relax and enjoy the garden beauty.

The peaceful days of autumn are some of my favorite. Weeds have slowed and there is less garden work to be done. It is a fine time to read a book on the patio and enjoy the breeze and cricket song. 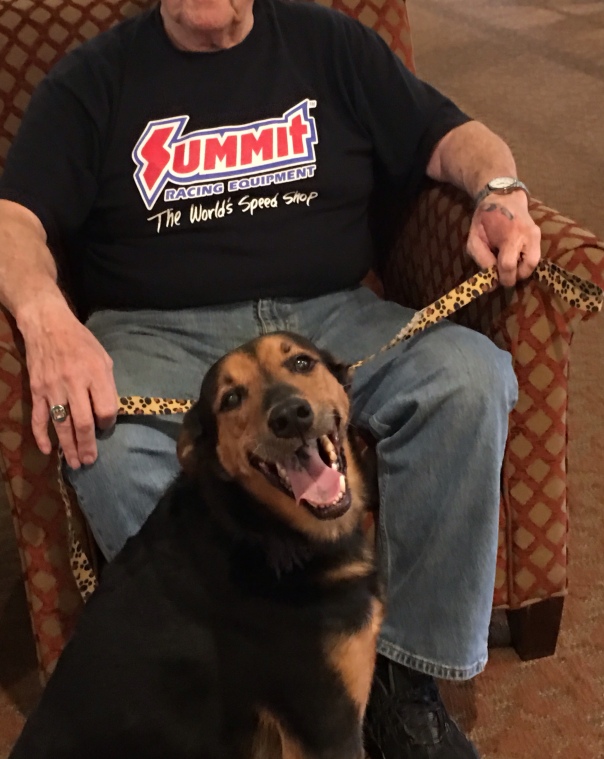 I took dogs to visit at the nursing home this evening. Can you tell Baxter had a good time?

I usually take Cassius as my tall dog that folks in wheelchairs can reach, but he is incapacitated right now. He was being a wild child playing in the pasture and tore a nail off. I didn’t want to take him with an open wound because of the chance of infection. A few people asked where the big dog who was stripped like a tiger was. He will return when he is healed up. For now he needs to take it easy.

Baxter did his “brother” proud. He did such a good job visiting with all the people. He was well behaved, courteous, and friendly. Baxter has always been a joy. It was wonderful to share the joy with others. 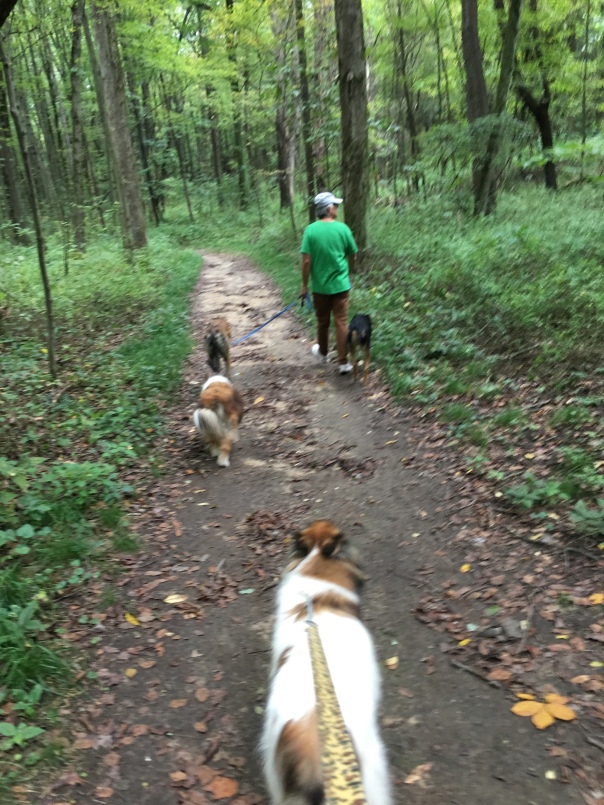 The summer heat is tapering off.

Except for today when I refused to go outside in the afternoon.

Cooler weather means a return to hiking for us.

Last Saturday I took Zeke and Shelby for hike.

And then on Sunday we took the dogs and hiked at Towners Woods. Although I am out of shape, it was a fun time. And I am in better shape than before I went.

We did try to hike this morning before it got too hot but Cassius re-injured his toe. He tore the nail off it while running at high speeds and turns in the pasture. The trail was rather rocky so it didn’t go well. We turned around and came back home when Cassius started having trouble. There were also quite a few mountain bikers using the trail so it was crowded.

But with fall being near, we should have numerous opportunities for other hikes. Looking forward to it! 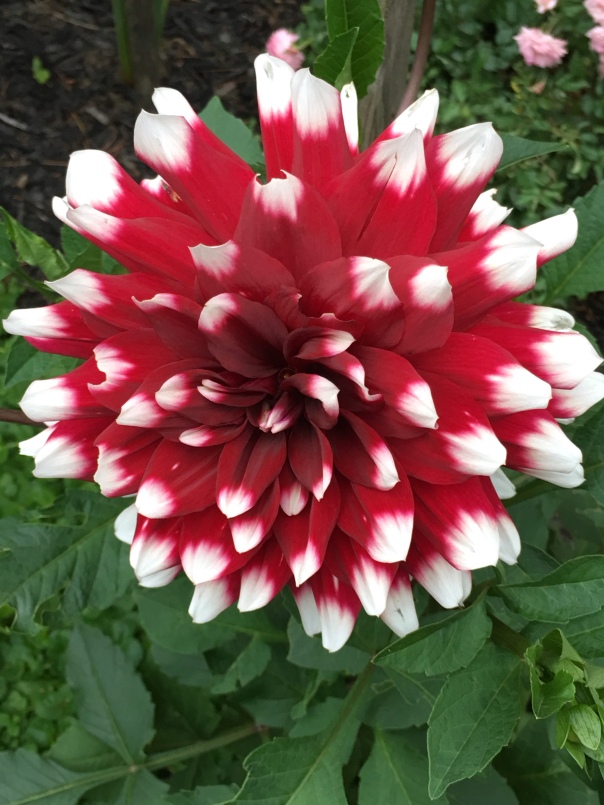 Actually, I got them in late so they are running behind schedule.

Perhaps I should plant some early and late next year so we have a longer time to enjoy them.

Not a bad idea. Enjoy!

Fall may be coming fast on the heels of summer now, but the roses are still hanging in there. 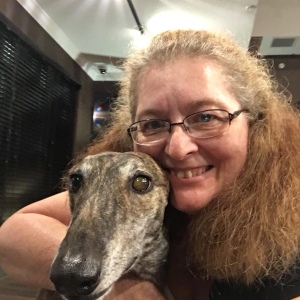 Do you have that one song that comes on the radio and you can’t leave the car, no matter what? Even if it means you are late to your desk at work? I heard that song today.

For me, that song is It’s A Great Day to Be Alive by Travis Tritt.

My mother suffered and died from Huntington’s Disease, which for years was known as Huntington’s Chorea. It results in the death of brain cells. This causes lack of coordination and a jerky, unsteady gait that interferes with walking. Onset of noticeable symptoms generally begin around 40 years of age. Physical abilities worsen and as brain cells continue to die, the person loses the ability to talk. Mental abilities decline into dementia. The affected person eventually becomes completely incapacitated, requiring full time care. (Here is a link about what I did the day my mother died. What I Chose to Do the Day My Mother Died).

The disease is genetic and passed on to offspring by a dominant gene. If one parent has it, each offspring has a 50% chance of also developing the disease. Believe me, the family of the affected person suffers greatly whether they also have the disease or not.

In the late 1990’s, when I was in my mid-30’s, I got tested for the disease. I had recently divorced and knew that I wanted to adopt more dogs. This was in my pre-Dog Rescue days. I wanted to know that I would continue to be able to care for any dogs that I adopted. And so, I underwent genetic testing to see if I had the disease.

I did not! Upon receiving my negative diagnosis and leaving the medical facility, we were driving down the road and I heard the song. It’s A Great Day to Be Alive! And it was.

Ever since, when I hear that song, I am taken back to the joy of that moment. Reminiscing the moment has always made me feel like the Phoenix rising out of the ashes.

As fall approaches, it is a lovely time to hang out on the patio. Cassius approves. The cooler weather allows more time for focusing on lounging, less time required to keep chasing shade. We move the furniture around when it is hot so as not to sit in the hot sun. 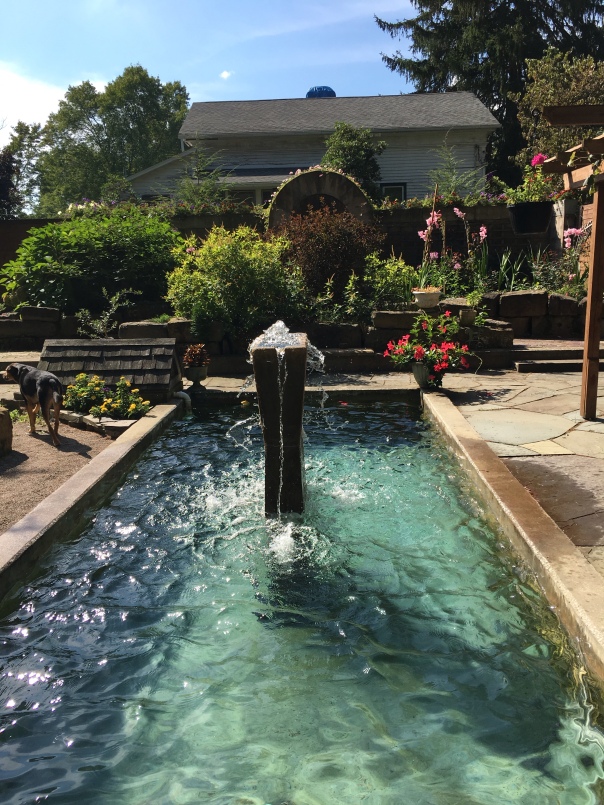 The flowers are not at their peak anymore, but they are still beautiful. The gladiolus are putting on their final show of the season. In a month or so it will be time to dig them up, dry the bulbs for a few days, then put them into paper sacks to await next year’s planting. There are still flowers to look forward to this year. The dahlias will open any day now. And of course it is chrysanthemum time. 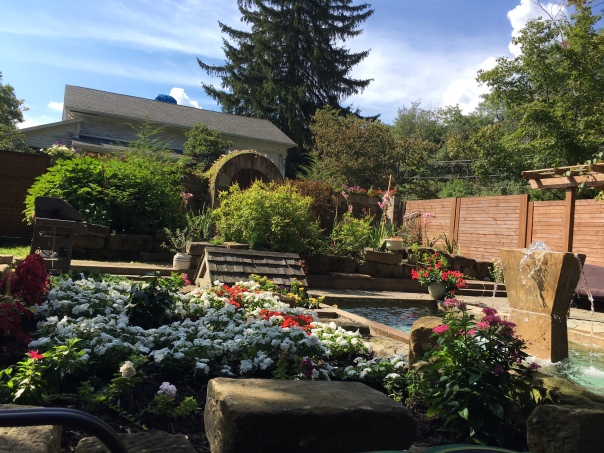 And so, the view is good. Next year this new flower bed will be totally different. It went in mid-summer so I grabbed some impatiens to fill out the few plantings we had for it. We will plan over the winter and put in some perennials in the spring. 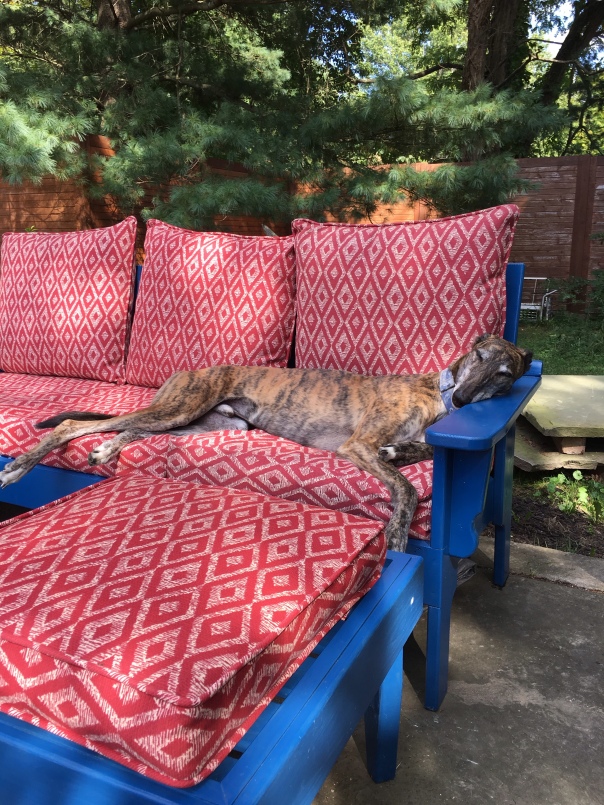 In the afternoon, there is still time for a snooze after a busy day of frisbeeing.

We have a house guest for the next week or so. This is Paisley. She is staying with us while her family is on vacation. She is little but mighty at 20+ pounds. Full of energy and likes to play with the big boys.

Actually, I don’t think she cares what size the other dogs are, she just wants the frisbee.

Paisley is also affectionate. And she calms down nicely too. 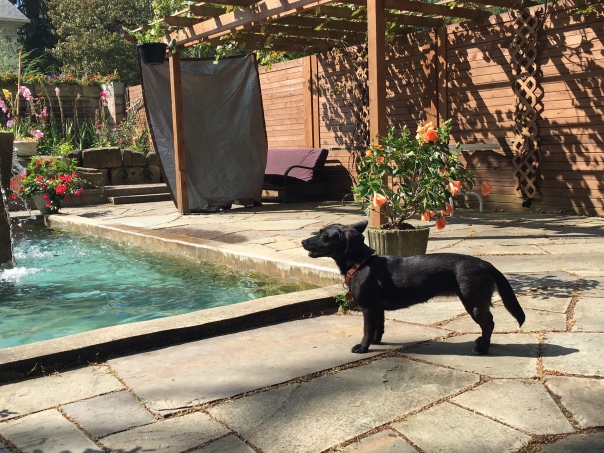 She appreciates hanging out and chilling on the patio just as much as the others.