These are our four cats, Harley, Lacey, Stitch aka Chester, and Morty.

This is one of our six new mouse traps. Hmmm! Why should we need mouse traps? We are over run with mice. I have seen evidence of them in multiple areas of the house. Infact I have actually seen mice in our house. I was having conversations with one while in the basement doing laundry. He sat on the stones of the wall and appeared to listen while I spoke. Once they began getting in my baking supplies, this was no longer acceptable.

I’ve never had need of mouse traps before. Harley used to be a world class mouser. He’s around 15 now and appears to have retired since we got the younger cats. He taught Morty how to hunt and that was the end of his career. Lacey is nearing 16 and not in the best of health, so although she used to catch mice, those days are over. Stitch is a young cat and new here. He acts like he has never seen a mouse before. He doesn’t appear to recognize them. Morty does catch some mice but he is a small cat and not able to keep up with the current mouse population. We hope he will be able to show Stitch the ropes. We begged Harley to come out of retirement but so far, no luck.

So although I am generally against killing things on principal, I must concede that in this case it may be necessary. Mice can carry disease. They can chew insulation from electrical wires. Both bad things. So far we have caught three large mice in 24 hours. Maybe the cats are on strike.

Sometimes the simplest things can make me so happy. One of those things for me is to have leftover pancakes for lunch at work as I did one day this past week. The pancakes I had this time were blueberry oatmeal chocolate chip.

My lunch made me smile that day. I think that it is good that small things can make me happy. That means that I am happy more often than if only monumental things could make me happy.

May your joy be great and your pancakes be plentiful.

Stitch came to us in early December. His owners lost their home so we agreed to take him in. We would keep him for a couple months. At that time, if his owners could not take him back, we would be free to keep him or find him a new home. So far it’s been about six weeks. It doesn’t appear as if he will have a home to go back to within the next two weeks. Our gain. Stitch is a great cat.

When he got here he was not neutered, was peeing blood, and had worms which meant diarrhea too. He had been peeing and pooping all over his last home. Not surprising. This did mean however, that he stayed in a crate when he got here. Staying in the crate also helped him and our other cats and dogs acclimate to each other. You can see that was successful. This is not all of our animals but you get the idea.

Within his first week he got neutered at a low cost clinic. I’m sure this was not on his bucket list. Next he got antibiotics. Between the two, his urinary issues cleared up. Then he got medicine for two different types of worms. The loose stool went away almost immediately.

Stitch did get time out of the crate every day to stretch his legs and have snuggle time but only when he was monitored. We frown on uncontrolled bodily functions taking place at random in our home. Not that it never happens with this many animals but we do what we can to prevent it. Especially since when one does it, the rest seem to want to join in like high girls following the cool kids lead.

Well, now that Stitch has his medical issues under control and is familiar with the other animals, he is free. The crate came down last weekend and Stitch is a free kitty again. He is doing great. No accidents and what a nice cat he is. We knew that he loved people and was a snuggler and a purr box. Well, he is also one of the most laid back cats I have ever seen. He wants to be friends with our other cats, although they aren’t so sure yet. And his reaction, or should I say nonreaction, to the dogs is amazing. The dogs played their indoor, bad weather games, which involve lots of running and leaping at toys plus lots of barking, and Stitch doesn’t bother to get up. He may lift his head if they are within a foot of him. But then again, he may not. Little Nikki even ran over top of him one evening and he didn’t get up.

I guess you could say we have a new cat. I think a new name might be in order for his new life. I am leaning toward Chester, as in Chester Cheetah, since he is orange. We will see. So once again, life is good.

“Only in the darkness can you see the stars.” – Martin Luther King Jr

I read an article today titled “I Have a Dream”:  25 of the Greatest Quotes From Martin Luther King Jr .They are an impressive bunch of words and ideas. I think they deserve further contemplation. I decided to focus on the one above for tonight.

I went outside and took a picture of the moon which, if memory serves, is a giant star. So in the darkness, I saw a star. Is this what Dr. King meant? Almost certainly not, although it is indeed true. I think it was meant to evoke more of a mental and emotional thought process.

Perhaps without the darkness that is suffering, we would not appreciate the good that we encounter. This holds true on a small or large scale. For instance, when we pick strawberries, if the weather is hot and the plants are dirty, we may undergo some suffering, albeit minor in this circumstance. We will likely appreciate the sweetness of the berries even more than if someone just gave them to us. Same berries but a different experience.

In taking a test, if you receive an ” A”  in a subject that comes easy to you, that is of course a wonderful thing. Now imagine a time when the subject matter was confusing to you, but you persevered and due to hard work, you received an “A”. That is an even more rewarding feeling.

Take it a step farther. You want to make a difference in the world. You spend years, maybe your whole life, working toward a goal. To make the world a better place for a certain group of people, or maybe for all people, or all beings. You see what could be from the point at which you are.

So friends, my wish for you is that you may see the stars.

Our home and animals have been called The Peaceable Kingdom. For the most part this is true. This makes me happy. The orange cat on the left is the newest addition to our crew. His name is Stitch and he seems to be a tolerant and laid back cat so far. Stitch was laying in the chair when Baxter Pup came along and decided he wanted to sit there. Baxter sniffed Stitch a few times, looked at him and then put one paw on the chair. Stitch calmly got up, moved to the arm of the chair and sat down. Baxter got up on the chair, laid down, and curled into a ball. Harley, the black and white cat, took in the whole proceeding without reaction. They all seem to know how things work around here.

Here you see Phoebe the greyhound and Nikki the 20 lb. sheltie. They are the largest and smallest of our dogs. They get along just fine. I have seen Nikki crawl across Phoebe to get in my lap. Phoebe’s only reaction is to roll her eyes in my direction, as if to say “oh, the indignities I must suffer, well back to napping”. Come to think of it, I have even seen one of our cats sleeping on Phoebe. Don’t let anyone tell you that greyhounds can’t live with cats.

These are our dogs Shelby the sheltie and Baxter. Or as we like to say, Baxter and his punk sister. Shelby isn’t really a punk, just energetic as our youngest dog. She always needs a job to do and is what’s known as a busy girl. She is only a year younger than Baxter so they play lots of games together such as Frisbee tug o’ war, and squeaky toy kick the can.

We are very blessed with a well honed and agreeable bunch of animals. We make new introductions to our pack carefully, and these introductions are always monitored. Letting them get to know each other at their own pace keeps things running smoothly. One brief interaction gone bad can take much longer to overcome. I truly do believe that I live in a Peaceable Kingdom and I love it here.

Some people think dogs don’t have emotions and feelings. Look at Phoebe above. First we have the depressed, moping face. She gets this face when it has been a long time since she has gone for a car ride. Tell me the face on the right is not that of a happy dog. She can go from moping to happy in 0.5 seconds if you say the “C” word, as in c-a-r. Yes, we do lots of spelling around here. W-a-l-k, F-o-o-d, O-u-t. 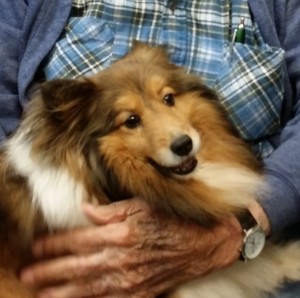 Or how about these pictures of Nikki? Bored face and happy face. By the way, her happy face in this picture is because she is visiting with one of her friends at the nursing home. These visits always make her happy. Me too! 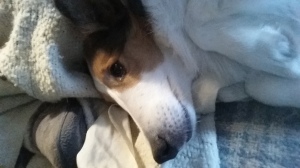 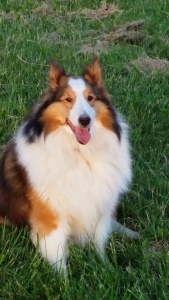 And how about Shelby’s sleepy face vs. her happy face? Even if you don’t attribute the same emotions to them that I do, you have to admit that they must be feeling different things in the two pictures. You must know someone to be able to read them. I think this is often true for dogs as it is in people. 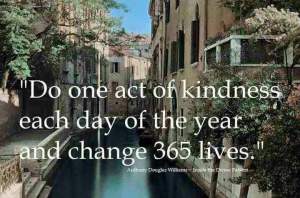 Over the Christmas season I had my Caring Revolution that you can read here https://sanctuaryacres.wordpress.com/2015/12/01/the-caring-revolution/. I tried to do one nice thing every day to increase the presence of the Christmas Spirit. I posted the above quote to my Facebook page yesterday, thinking, why should it be only a holiday thing?  And so I shared it, thinking everyone could stand to benefit from this.

But then I thought some more. Rarely a good thing. So I shared this post, now what? Does it become buried in my newsfeed, never to be seen again, except perhaps next year in my Facebook memories? That’s not going to work for me. So I am going to keep a log in my Creativity Journal and try to do at least one good act every day to record. So far in 2016, three days have passed. I did a kind act to record on days 1 and 2 but nothing for the 3rd. Today is the 4th day and it is still early so I better get busy.

I will report in on this Journey from time to time with some specifics and let you know how it is going. Please feel free to join this army so that acts of kindness may be spread far and wide.