I am intending this to be the last installment of What the Dog Ate, but I know better so I am just calling it Part III. I’m sure that some of my current or future dogs will eat some amazing things as well.

Pictured above is Phoebe. She looks so innocent, doesn’t she? Don’t be fooled. One day, when she had not been with us very long,  we were looking for the cable remote to turn on the tv. We thought we must have really misplaced it because we couldn’t find it anywhere.  Eventually we did find bits of it but couldn’t be sure where the rest of it was. We had seen Phoebe pick it up before so we knew it was her. Some time over the next few days my husband was picking up after the dogs and came across a very incriminating pile. It was covered with numbers and buttons that said things like “menu”. If only we had a digital camera at the time! That would have been a photo for posterity. Or at least a good laugh. Phoebe is older now and doesn’t get into much trouble anymore. The only thing she did recently was take fur bundles from dog brushings out of the trash can and distribute them around the living room for decoration every time we left her in the house. Just bought a trash can with a lid on it.

We also had a strange dog eating conundrum in our rescue a few years ago. We got a call from some adopters who took their recently adopted dog the vet because it was passing a pair of lacey thong panties. The foster home and the adopters vehemently denied owning any such garments at any point in recent memory. We can only assume that the item was ingested at the dog’s original home. All ended well with the exception of one vet bill with a never to be known cause. 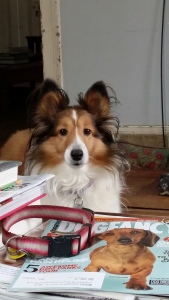 Then there was the foster dog above that some of you may remember. This is Miss Sassy Pants. She came home from the vet’s with one of those stretchy, self adhesive bandages on her leg. I put her in her crate for the night, as I have done with many a dog, and in the morning the bandage was gone. I never did find hide nor hair of that bandage so I have to believe that it passed unnoticed and all is well.

Skylar was another foster pup who had a remarkable digestion. This boy loves his toys. Especially those he can chew. I had to take a tied and knotted polar fleece bone from him one day because he was destroying it. Apparently, I was too slow. Skylar liked to go to the mail box with us. One day on the way back to the house he stopped to make a deposit in the drive way. It went on and on. This turned out to be because he was passing a piece of that pink polar fleece bone that was about six inches long. It snowed that same day and many days thereafter. I saw that pink remnant during the spring thaw and got another good chuckle.

I’m sure we’ve had other “passings” over the years but none stick in my memory banks as well as these. I hope cleaning up after your dogs is a mundane and unimpressive task.