So it turned out that it was not a mouse that Harley and Morty were hunting. In fact it was a half grown squirrel. I  don’t know how he managed to fit in that tiny space. The cover had to be removed from the heating baseboard before Mr. (Ms.?) Squirrel would come out. No small wonder with two fierce hunters waiting. 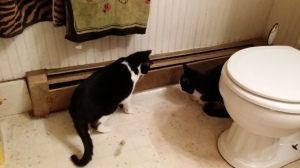 Well, when Harley found out it was a squirrel that was already half grown, he immediately lost interest. The wise old man seemed to know that this was more than he should mess with and walked away leaving it for the humans to deal with. Wisdom being the better part of valor and all that. See Harley below. 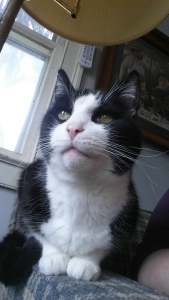 Morty, being younger and less experienced, thought that he would handle the situation himself. The dastardly human intervened so as to keep our hero safe. Even now Morty keeps returning to the bathroom. I don’t know if he is looking for action or reliving his big adventure. 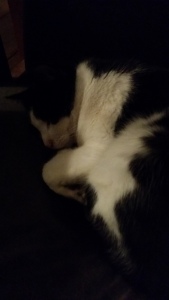 Morty at the end of a long day’s work.